Today, it is my pleasure to share with you the story behind my book, Modern Rainbow: 14 Imaginative Quilts that Play with Color.

But first, let me introduce myself... I'm Rebecca, but you can call me Becca. I'm a mom to four and a wife to one. I like chocolate and quoting funny movies. Recently, we moved back to my hometown of Saint Louis, Missouri, but we lived in Texas for a while. So I say things like "y'all" and "yonder," as in "hey y'all, I blog over yonder."

The short version is that basically God told me to write a book. (Is it stranger for me to say God gave me a vision to write a book?) (Sometimes I joke about serious things.) The long version is the journey of actually making the quilts and writing the book. Throughout the post, I've interspersed some pictures I took while making the quilts – you know, pictures I couldn't share on social media.

When I first began making quilts in early 2013, I really didn't know where to start other than making awesome (hopefully!) quilts. I had a theme and I had my quilting skillz. So I just started with what I had and a plan to improve my other skills like photography and computer graphics along the way.

So let me back up a bit. I love to sew and quilt, right? (That's been established. Me writing a book about quilting establishes this as fact, yes?) So way back in late 2012, I was yearning to quilt, but not just to quilt – to design patterns and stretch my creative abilities. I thought constantly of designing quilts and clothes, and bags too, actually. My thoughts of making and designing had no end! It had gotten to a point where I was annoying myself with my fascination with cutting up fabric and making something. 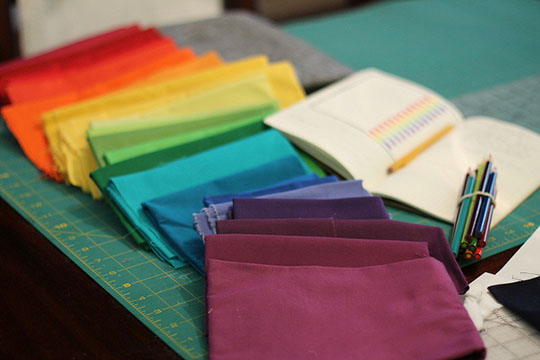 Knowing I had more challenging quilts and designs yet to come, I started in early 2013 with quilts that played with the colors in the rainbow. Color, especially colors in rainbow order, just inspires and energizes me. My first quilts were playful expressions of my love of color.

One Sunday in early December, we were at church as usual. After several worship songs, the worship leader will lead the congregation in prayer. As is his habit, the worship leader begins his prayer by telling the members of the congregation, "If there's anything coming between you and God, ask the Holy Spirit to put it to rest so that you can focus on worshipping God." The goal here is for each person to focus wholeheartedly on God and nothing else.

But as was my habit back then, I found myself distracted by my desire to make and design. So, frustrated and annoyed with my constant quilty distraction, I prayed that morning, "God, if you want me to do something with this passion, please show me something to do. If not, please quiet my desire to make so that I can focus on what it is you want for me." 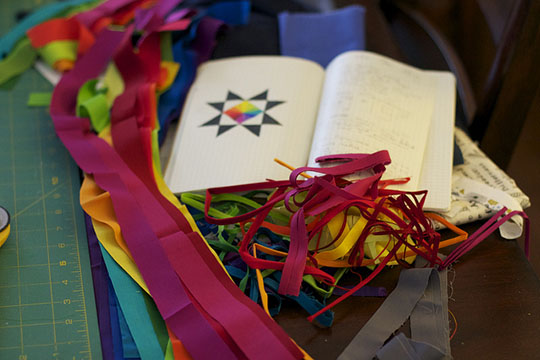 I had this lovely, cardboard-bound Moleskine notebook that held all of my Modern Rainbow sketches. I was terrified I'd lose it so it never left my house. Here you can see the main block for "Lucy in the Sky" and some quilt math to the right. I love combining colors so that the colors nearly shine! And guess what? I lost that little book. Thankfully, it was after the book was finished. Unless I sent it in to Stash...?

It sounds crazy, but that night (it seems so easy sometimes: you mean all I have to do is pray and I'll get an answer?!), I dreamt that one of my friends was writing a quilting book about rainbow quilts. The next morning I woke up a complete grouch. I'm embarrassed to say that I was jealous of my dream friend. It took a couple of hours before I realized that it was only a dream, and that I could write a book about rainbow quilts.

God had given me an answer to my prayer. In fact, it was a fairly specific answer. 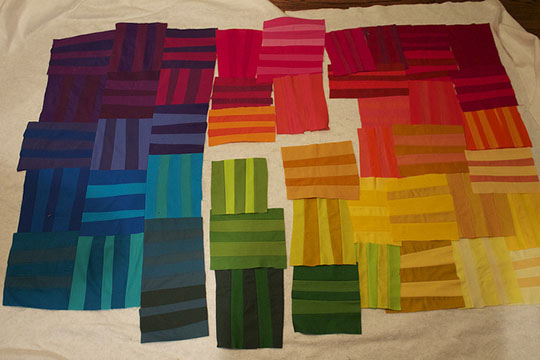 Rainbow Remix was one of the first quilts I made. I brought it to QuiltCon in 2013, thinking I could show it to an editor or something. But after attending a few lectures geared around publishing, I ended up just showing my friend Deirdre in our hotel room. :) The coolest part is that it's appearing at QuiltCon this year!

Now, I don't know about you, but if I had a dollar for every time I've had a crazy idea or notion, I would be at least $500 richer. (And my mom would probably get less texts!) Most of my plans of world domination are fueled largely by drinking too much coffee, and usually by the time the caffeine has worn off, I'm ready for a nap instead. 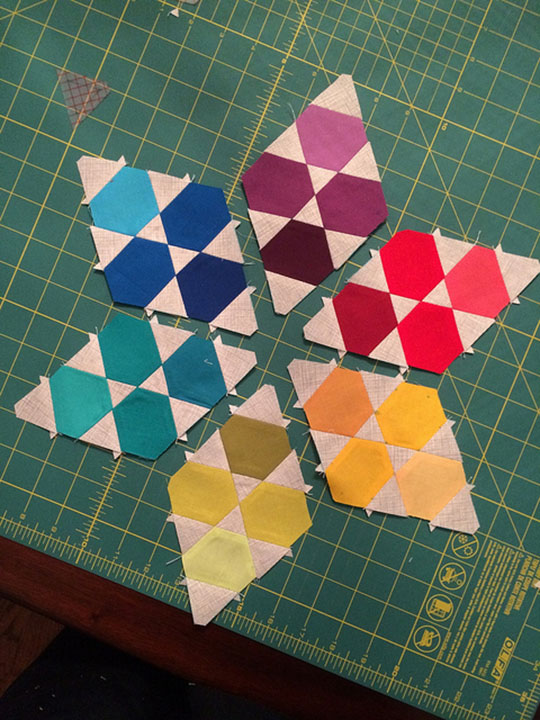 I obviously couldn't post these behind the scenes pictures on social media. So I texted them all to my mom. I texted her so many pictures. She eventually stopped responding to all my texts. :)

Unlike my norm, I didn't tire of the notion either. Even when the caffeine wore off, I still felt all those things. 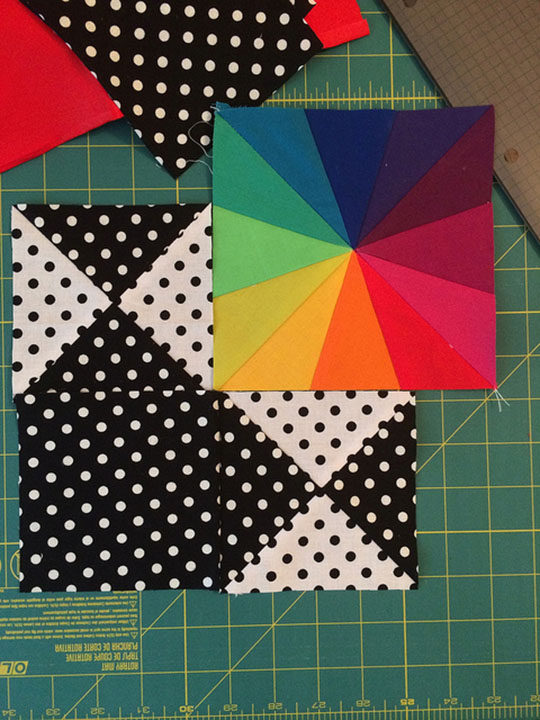 This is why test blocks are good. I was on a really tight timeline so I lamented every little (and big!) mistake. My goal was making at least one quilt top a week in the months of December and January. It was tough. :)

I began designing, researching, and learning computer graphics programs, and yes, quilting. When I started, I thought one needed to make all the quilts prior to submitting one's book. So I just started making, knowing it would take me months to finish. (It took me nine months to submit my proposal. When I submitted my proposal I had made three quilts; the rest were sketches of proposed designs.)

Plus, although I felt confident, there was a part of me, a large part, that thought about the negatives: This is crazy. What if I fail? Do I want to work that hard? Is this quilt cool or is it ugly? I totally suck. I stink too. Who am I to write a book? 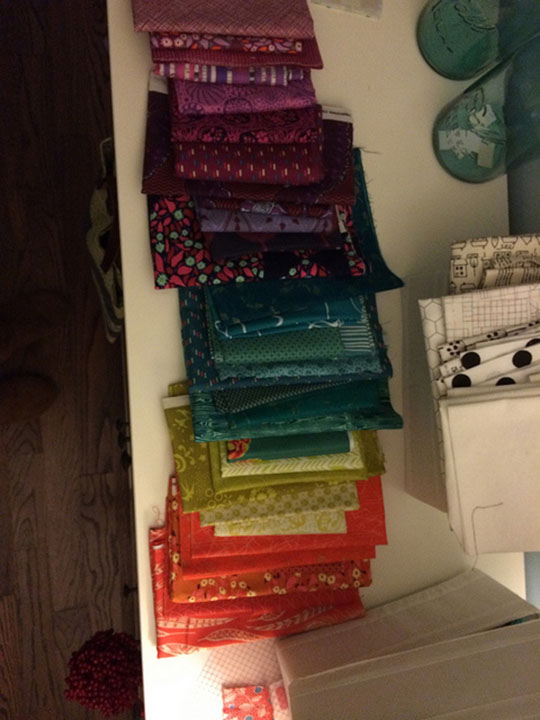 This isn't the best picture, but it really captures my life in the midst of writing and making. This picture was taken at Christmastime of 2013. I likely snapped this picture late one night after finally perfecting a color pull for a planned quilt. This fabric pull eventually became the "Icarus Star" quilt. Even though I think rainbow quilts are pretty much the bomb, I wanted to provide alternate color stories that weren't instantly perceived as rainbow.

I will say those negative feelings never went away. They never do really. But I felt that I could make something, even if it was garbage, and stand by it. Is it weird that I found that gem of wisdom in a Family Guy episode? Plus, even though I'd set out to submit a book proposal, there was always the possibility that I would chicken out.  :)

Then on a summer visit to St. Louis, I visited the St. Louis Modern Quilt Guild and just happened to sit next to two authors from the guild. (What are the odds?!) Casey encouraged me to submit a query letter. I listened to her, and a few weeks later I got an email back saying Stash looked forward to seeing my full proposal.

Then I was really committed, ha! 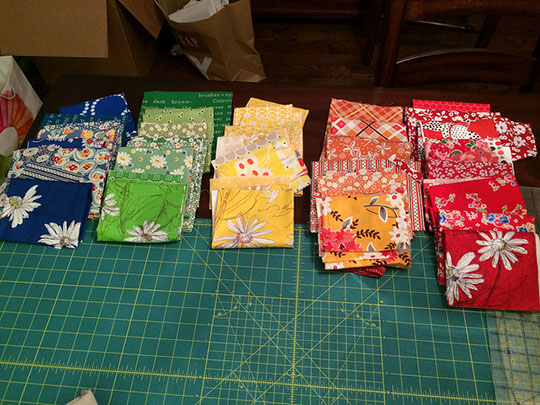 These vintage-inspired fabrics eventually became "Bubbles." Do you have a hard time reconciling your love of different genres? I love love love vintage feedsack-inspired fabrics and designs but I also love bold and funky modern designs. It used to worry me a lot that I couldn't commit to one (who am I!???) but for Modern Rainbow I decided to embrace my personality splits and create traditional-inspired quilts, modern quilts, and improvisational and liberated quilts. See? I really can't choose...

Prior to this, I had lamented over my lack of followers (I think I had around 50 or 70 followers when I first set out to write a book proposal). But now, I felt protected. Because I had few followers, there was no pressure to perform, no obligation to sponsors, and no responsibilities to make anything for anyone else. In my own little corner of the internet, I could make and build and grow without anyone looking.

Speaking of me talking and no one listening, at some point it occurred to me that perhaps God meant for this book proposal writing/making journey to be a personal exercise in faith. Perhaps it was just between Him and me.

Though that realization was painful–I think I literally caught my breath when the thought occurred to me–I eventually made peace with it. I'm a very visual person, so I imagined laying all my months of work and quilting at Jesus's feet and saying He could use me as He thought fit, whatever the outcome. Eventually, I decided that God created me to be a maker and so He could use me as He wished. 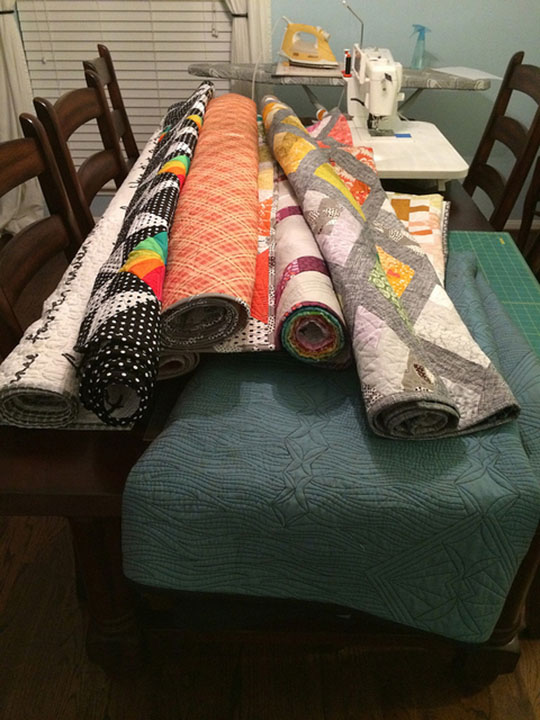 Finally! Fourteen finished quilts! (I was so relieved!) Now, how am I going to ship all of these?!

I'm overjoyed to say that I can share my quilts and my book with you. It is an incredible experience as an artist and an incredible journey as a person walking in faith.  If you have gotten this far, thank you for reading along. It was difficult to put into words! (It's so much easier to just quilt it out!)