It’s so exciting for me to see Floral Abundance available as a pattern pack this month. It’s a quilt I love and one that has brought me so much pleasure throughout its making: from the challenge of its conception to the thrill of the design coming together to its final hanging on the wall. To see it as a pattern pack is the icing on the cake.

In some ways this quilt has been years in the making. Before I tell you exactly how the idea for Floral Abundance came about, I’d like to show you a couple of pieces of work which came before it, but which both strongly influenced its design. Two of the nine blocks in Floral Abundance are based on my very first appliqué quilt: my first attempt at appliqué and design rolled into one. It was made without access to conventional quilting fabrics and without having any idea of how to appliqué either! I was living in Venezuela at the time, without access to either the Internet or quilting books, so I intuitively worked out the easiest way to stitch fabric to fabric. The quilt is not perfect by any means, but it certainly gave me confidence to continue with appliqué. I completed it during my last year in Venezuela and took it with me to Canada, where I entered it into a provincial show and where, to my astonishment, it won a ribbon.

Baltimore Revisited 2005 was my first attempt at quilt design. I interspersed traditional circular and heart-shaped wreaths with individual flowers and blocks of four flowers reflected on axes of symmetry. 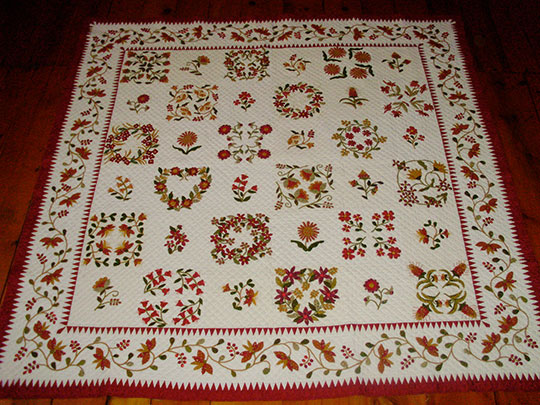 I mentally squirreled away the ideas from this one-off design.

Much later in 2012, I had been playing around with my silk collection and the same sort of ideas as Baltimore Revisited, and I designed an olive wreath composed of four olive sprigs. I love its simplicity. 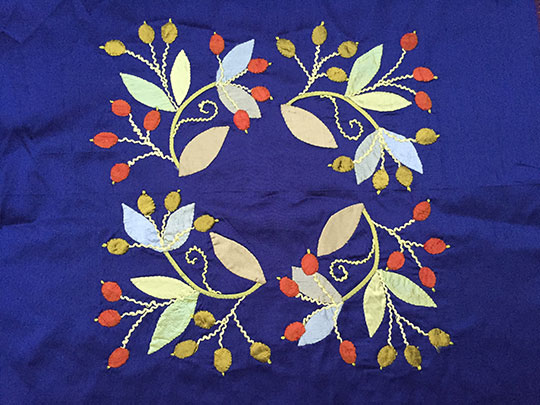 I’m sure I was subconsciously ruminating about these design ideas when I enthusiastically proposed designing an appliqué quilt to showcase a new fabric collection by Michael Oakshott in his signature shot cottons ( www.oakshottfabrics.com).

Floral Abundance was conceived during a phone call between Michael and myself in late spring of 2013. Michael was about to launch a new pastel range of fabrics and was unsure how they would be received. In the mood for a challenge and to thank him for his generous supply of fabrics, I told him that I would design an appliqué quilt using the sixteen shades that made up the range that he called “Impressions” to showcase the colors. I had no idea what colors made up the sixteen shades when I made the suggestion!

Michael loved the idea and a fat quarter bundle of sixteen fabrics dropped through my letter box in Canada a couple of days later. I unwrapped them with some trepidation. Once they were revealed, I realized that in terms of colors I was way out of my comfort zone. Up to that point I had never designed a project using such soft colors, but I felt that being pushed to use a limited and dictated color palette was a good exercise for me artistically. I knew that recently some of my picks had become a bit formulaic—I love bold color contrasts and like many artists have my favorite shades and combinations. Color choices had become too easy; I was using the same palette again and again, as I instinctively knew the best combinations for maximum impact and wow factor. Now I was presented with something else entirely.

I was so enamored with the olive wreath pictured above that I decided I must include it. Since it was simple and easy to construct and would get my creative juices flowing, I started with that. Even though all my appliqué is done by hand, I can be incredibly fast once excited by a project and that first block took me only a day to complete. 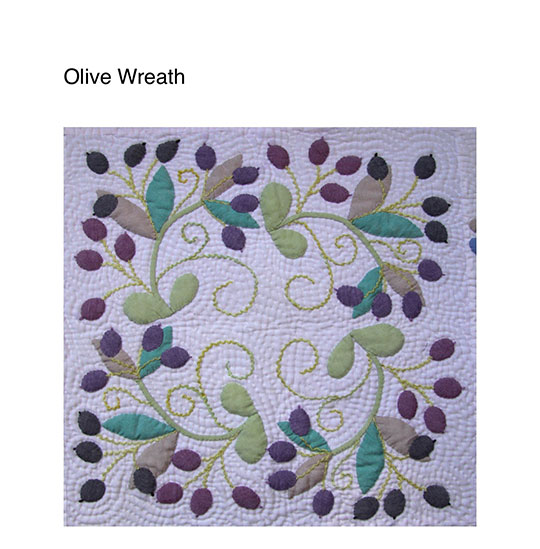 Now with one block completed, I drew on the idea of my very first quilt, Baltimore Revisited, and decided to go with the heart and circular wreath idea. I set to work, averaging a completed block every two or three days. I love these buzzy creative days when my fingers hurt from appliqué, but the process is too exciting to stop. I am very old school, either designing directly onto the fabric or drawing out ideas in pencil first. It is laborious and time-consuming, but the excitement of wanting to see the finished design is a great incentive to sew as fast as I can. Baltimore Revisited is a forefather of Floral Abundance and two of the blocks—the Peony Wreath and the Berry and Daisy Wreath—are directly taken from it. 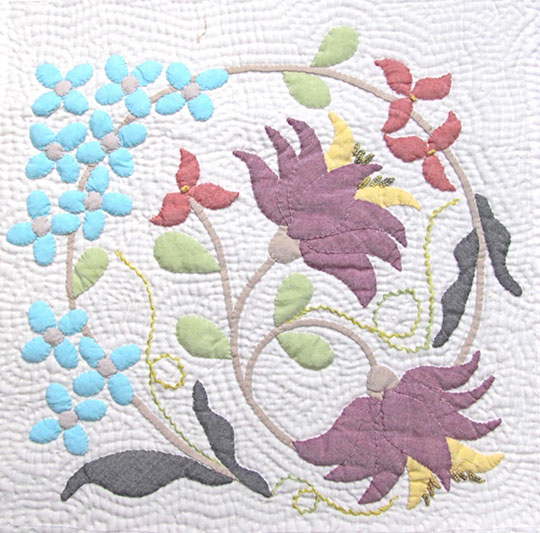 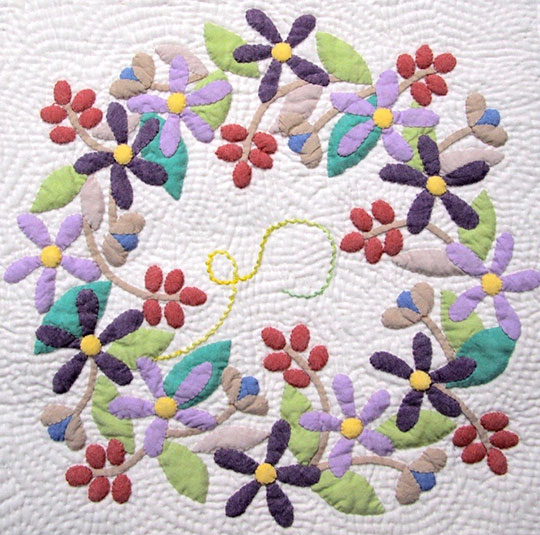 Within three weeks I had nine completed blocks. I laid them out on the floor in front of me, poured myself a glass of wine and sat looking at it, waiting for a final design to dictate itself to me. A glass of wine helps! I was concerned how different the olive wreath seemed from the other wreaths, and I needed to be able to tie it in with the whole design. I decided that the four borders would be one of my signature flowing arabesque stems with all of the flowers, leaves, and berries from the central blocks combined. This was easy for me to visualize.

As soon as I visualized this step, I realized that if I put olives in the four corners, as olive trees, the whole quilt would come together beautifully. I was very excited by the prospect of seeing it completed. 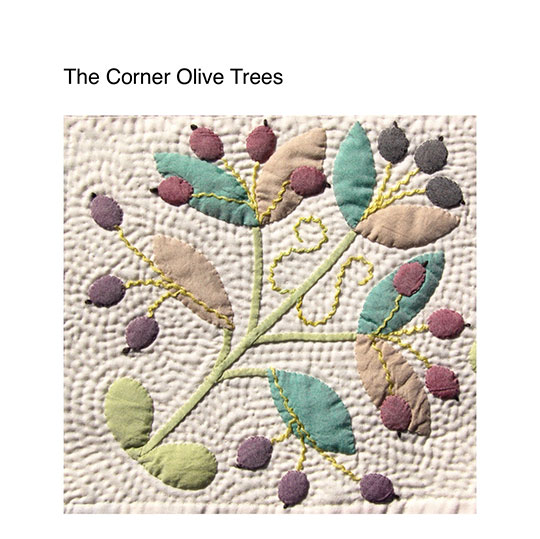 Three weeks later, with all the appliqué completed and blocks sewn together, I embarked on a week of marathon hand quilting. As luck would have it, it was now June, and the Wimbledon tennis tournament was in full swing. I quilted the whole of Floral Abundance in front of the television during the second week of Wimbledon 2013. The Prairie Points seemed an obvious finishing touch and used up all the remnants left over from the appliqué. I sent a photo of the completed quilt to Michael, who was delighted. I felt I had fulfilled my remit, but as soon as it was finished and photographed, I packed it away. I never love my quilts upon completion, and this was no exception. I had worked on it so intensely for a couple of months that the very sight of it made me feel quite worn out. On top of that, I was unsure of how well I had used the colors. I packed it away and forgot about it for a couple of weeks.

Throughout the two months Floral Abundance had taken me to make, my husband had been working out of the country. His homecoming seemed as good a time as any to bring Floral Abundance out of the cupboard. I wondered what my husband, who loves my bright, bold sense of color, would make of its soft palette. As I unrolled it, I knew I had achieved what I set out to do, as when I saw it again I absolutely loved its balance and softness. I held it up to show Benjamin, my husband, and waited for his judgement. He stepped back, took a breath and said, “Wow. I LOVE that. It looks like an antique. It’s an absolute beauty.”

Of course I went on to make a red version with my signature bold use of color. How could I not? But I love the original version in equal measure, and it is now hanging in a hallway in Chile, where a tangled mass of agapanthus in soft blues and whites compete through the French doors to the garden to show it off to its very best.