We are so pleased to be kicking off the Modern Art Quilts blog tour today! This book, by award-winning fiber artist Sue Bleiweiss shares her fusible appliqué technique for creating gorgeous modern art quilts. More than just a technique book, Modern Art Quilts also features a deep dive into the basics of art and design, with design exercises to get your juices flowing.

Today we wanted to share some examples of the principles of design, as seen in Sue's own work! Plus, scroll down to the end of the post for a giveaway.

Set the Table (below) is a good example of asymmetric balance. The variety of unrelated shapes and elements (vase, glass, apple, bottle) adds balance to the finished quilt. Imagine this quilt with just the flower vase on it—the design would look unbalanced and lopsided. 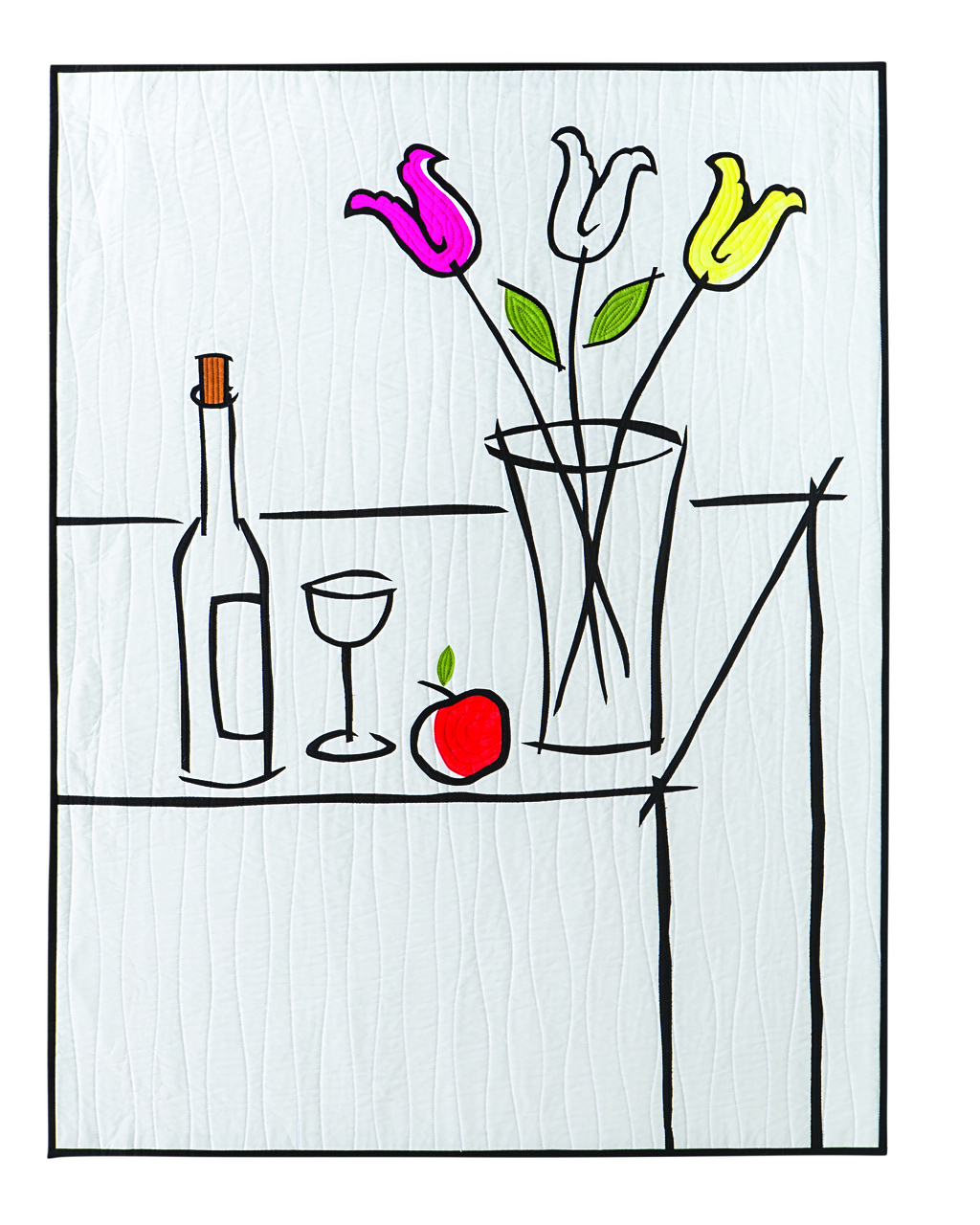 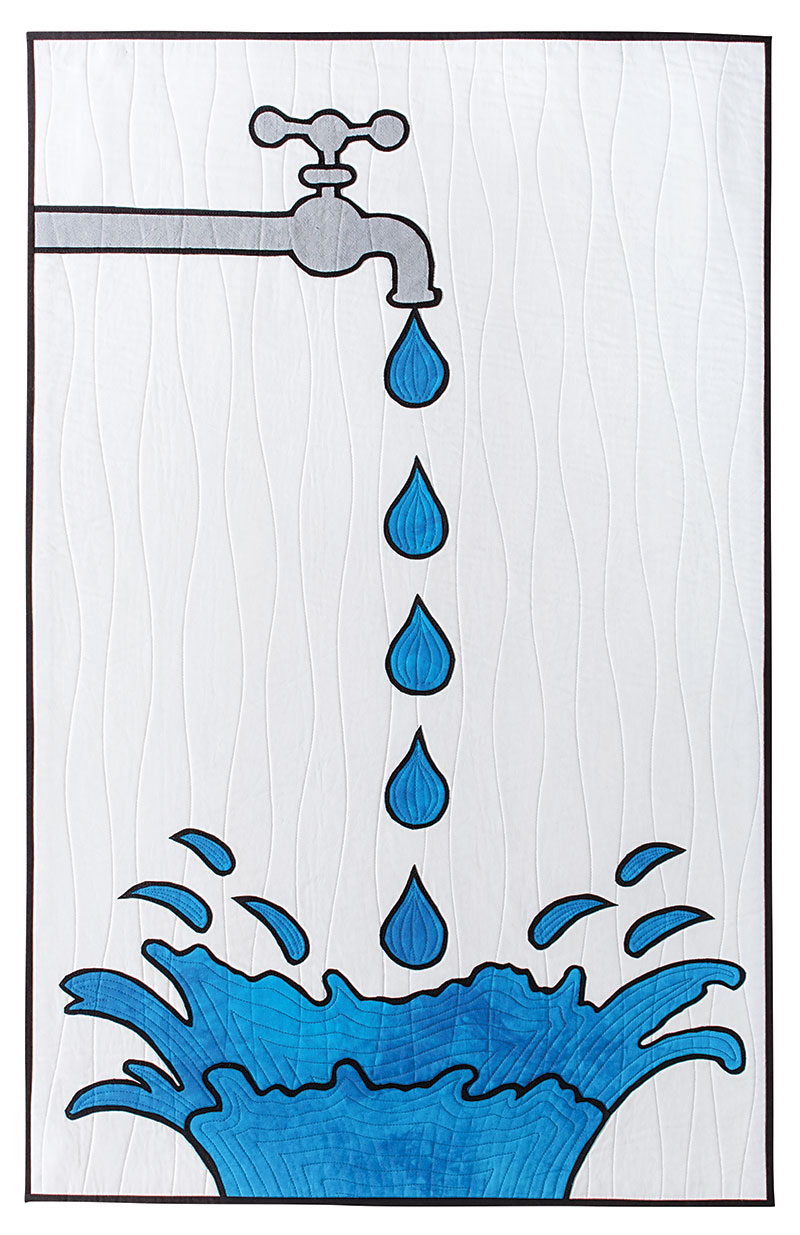 The designs for Moon Over the Concrete Jungle are an excellent lesson in contrast. In the original version, the imagery was good, but the quilt was boring and dull because of the lack of contrast. In the second version, I added some contrast to the buildings by darkening the sky. This improved the quilt quite a bit, but it still felt boring so I added the image of the moon to break up the sky, which also added just the right amount of additional contrast.

Space refers to the area between and around the objects—also referred to as negative space. Negative space can represent shapes by using the areas between objects or lines. In Vase with Flowers, the negative space implies the shape of the vase. 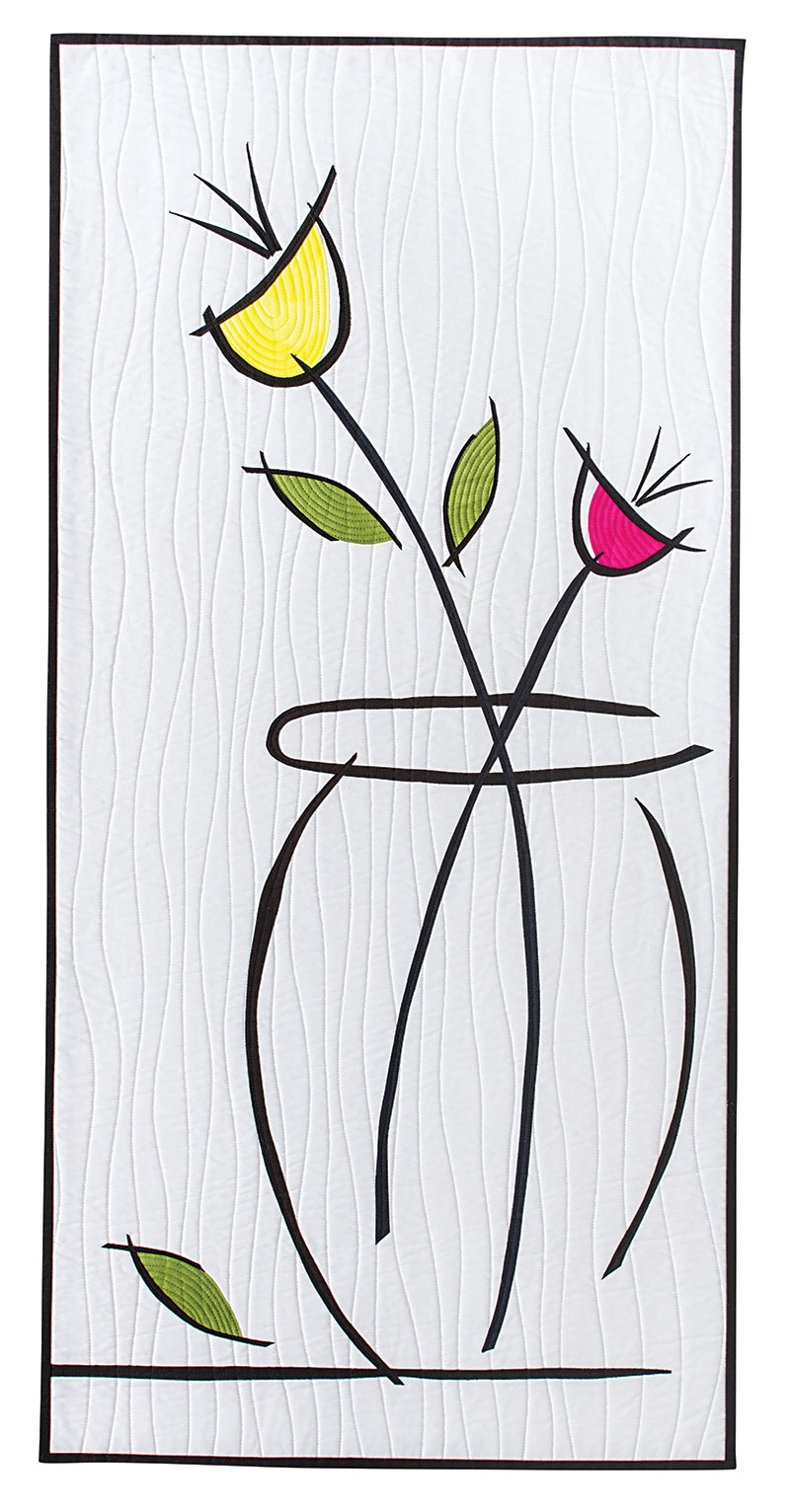 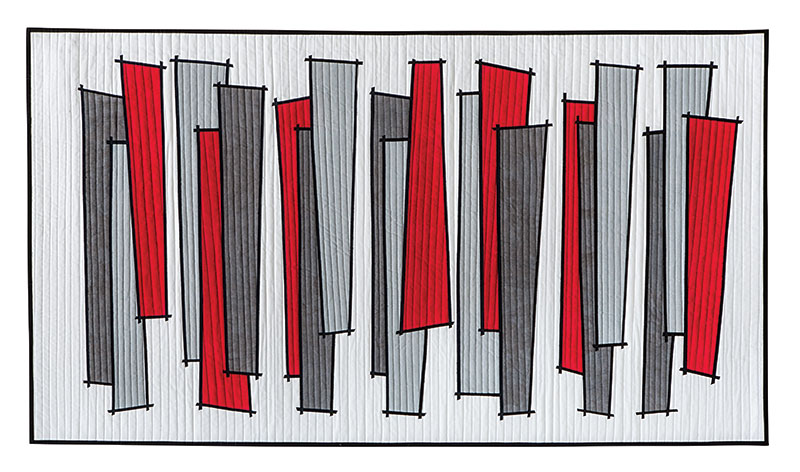 Variety refers to the use of several related or unrelated elements, colors, images, shapes, and so on used to create visual interest. By varying the components in your quilt you create interest and avoid a boring result. For example, in Stacks of Three, if I’d used just one color instead of three for the rectangles or used the exact same layout for each stack, the lack of variety would have resulted in a very boring quilt.

Emphasis refers to the focal point of the artwork that the artist wants to highlight or draw the viewer’s eye toward. In The Dress (below), I used the color red on her lips to draw your eye to her face, creating a focal point that I wanted to emphasize. 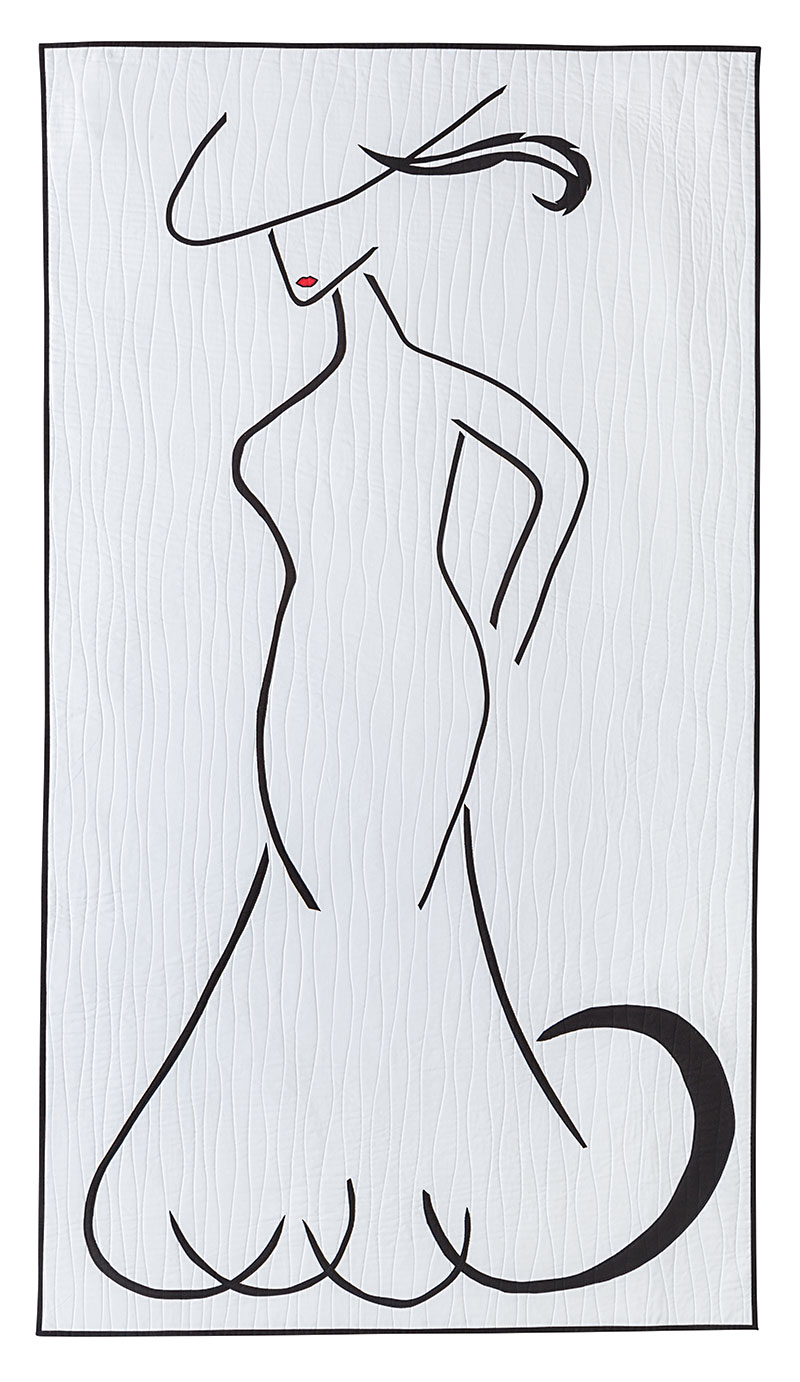 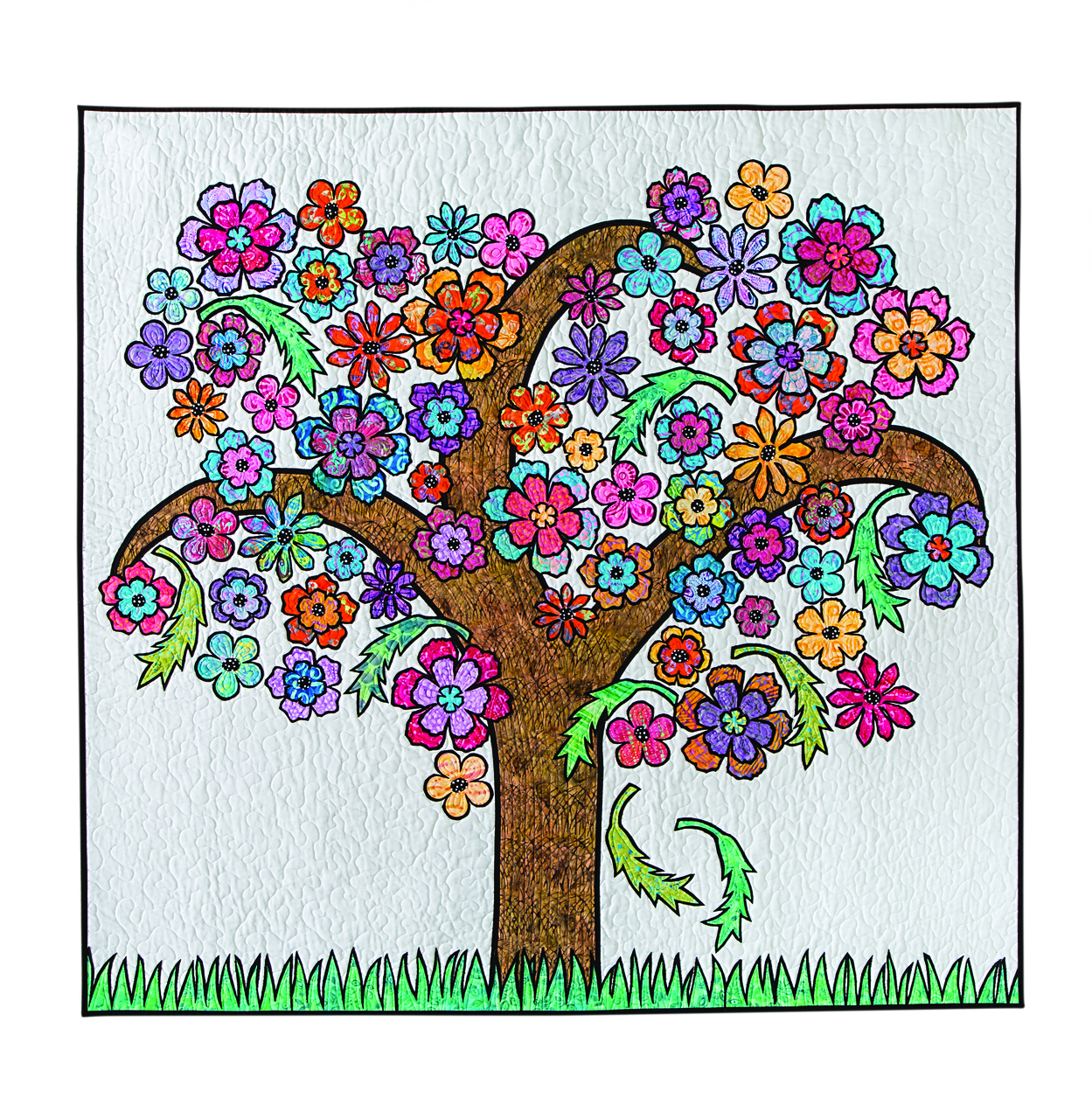 We hope you enjoyed our Sue's gallery of the different elements of design! Follow along with the whole tour:

Oh, and did we mention a giveaway? You can enter to win an ebook copy of Modern Art Quilts HERE.