Welcome to Melva Loves Scraps and the Pieces from the Past sew along!

I am beyond excited that you have chosen to join me in this journey to the past as I share the Kansas City Star quilt patterns that were collected and saved by my Grandma Schleich, as well as the letters that former German Officers that had been held at the Prisoner of War camp located near Trinidad, CO.

It is with a deep appreciation to C&T Publishing for granting permission for me to scan and share these patterns at no cost to you. Details of the pattern and letter release dates can be found at the end of this post. I recommend that you sign up to receive notifications via email by signing up in the right sidebar to guarantee that you don't miss a single post. You can also follow along on bloglovin', facebook and instagram.

Over the years, here on my blog, I have shared some brief details and snippets of info with you about my Grandparents. But to lay a historical background I offer a brief synopsis of the lives of my Grandma and Grandpa and how and why they came to America...

Cue the song by Neil Diamond from The Jazz Singer - America!

My Paternal Grandparents (Phillip and Katherine {Bohl} Schleich) came to America as children with their families as German Immigrants - more specifically, Germans from Russia. If you are interested in the why they were considered German's from Russia you can read the next little bit. If you want to skip the history lesson, feel free to scroll past it... I'll never even know.

"During the sixteenth and seventeenth centuries Germany had become the scene of bitter and prolonged religious conflicts. The underlying causes were social and political injustices and religious abuses.

When Martin Luther broke with the Catholic Church, he touched off a series of devastating events. With religious issues absorbing the energies of the people, social and political progress came to a standstill. You can read more on this by looking up Martin Luther.

The Seven Year War took place from 1756 to 1763. This war was considered the crucial one which helped the colonists decide to move to Russia.

In 1763 Catherine the Great offered the Germans villages of their own role and 120 acres to every son born along the Volga River. The villages were formed by people who came from the same general neighborhood but Catherine wanted those of the same religious convictions to settle in the same villages. Thus the Schleich and Bohl families moved to Huck, Russia.

Years later the Germans left Russia for the same reason they left Germany - Catherine didn't live up to all she had promised and the settlers became unhappy. It was in the late 1800s they started their emigration to the United States."

Short story... they were not Russia citizens, rather, they were still German citizens. The route they made in order to make the journey had them leaving Huck, Russia by train to Bremen, Germany before they could emigrate to the US on the Hanover, arriving in Galveston, Texas.

The two families lived in the same village (Huck Russia) and Phillip and Katie knew each other as children.

While living in Russia, Katie was a young girl when she had a grandparent that was near death. Her mother sent her to retrieve a bucket of water, an act on her mother's part so that she was not present when the grandparent took their last breath. Phillip saw her and being an ornery little boy he threw a handful of mud in the bucket.

I have never heard the outcome of the story or Katie's reaction to the mud in the bucket. No doubt she had to get a fresh bucket of drinking water... but can you imagine the devastation of learning upon her return that her grandparent had died... and the potential for her blaming herself for taking too long to get the fresh water??? If you follow the link in the previous paragraph {the highlighted word Russia} you will see some pictures of some underground springs in Huck... I cannot help but wonder if this is where Grandma was sent to get water as a child. 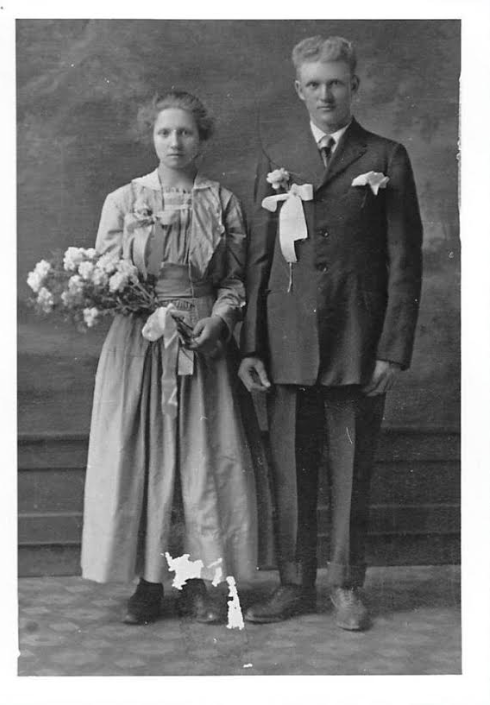 I suspect that Grandpa did regret his action... just the fact that the story stuck with him for years and stood out as one of the stories from his childhood that he felt worthy to share when my Mom asked him about his life in Russia as a kid in 1980.

Phillip attended school for two years in Russia, and for one winter in Kansas after their move to America. When the Schleich's left Kansas (where their sponsor lived) they moved to Swink, CO. Phillip went to school through 6th grade, completing both 2nd and 3rd grade in one year.

Phillip and Katie lived first in the lower Arkansas Valley area (La Junta, Swink, Rocky Ford). They were farmers and farmed land for a man named Mr. O'Brian. Mr. O'Brian then asked them to farm land located East of Trinidad, near a tiny little community called Model. It was while they were farming near Model in the early 1940's that the WWII Prisoners held at Camp Trinidad were "hired" to assist with the sugar beet harvest. You can learn more details and see pictures of the camp at "Westword."

Now that you know just enough detail of my family history I will move onto the details of this sew along.

I will publish one pattern and letter every three weeks, beginning January 23, 2020.

(You may be wondering, "why every three weeks?" Well, I have 20 letters and patterns that coordinate with each other and if it were a monthly release it would take nearly 2 full years to complete and I didn't want stretch it out that long. And I thought that 3 weeks gives ample time to complete the blocks. I know that life can be busy and I don't want anyone to feel too pressured by publishing weekly or even bi-weekly.)

The blocks will vary in size from 9" finished to 16" finished. There will be a variety of techniques - pieced, foundation and English paper pieced, as well as varying skill levels from easy to more challenging. However, to avoid any frustrations with the most difficult blocks I am offering some "alternative" blocks that are much easier. Something for everyone!

The quilt will finish at approximately 66 inches by 81 inches.

I have used a variety of fabrics - prints and solids from assorted fat quarters - approximately 20 total.

An additional 4 yards of muslin or background fabric will be needed for the background of the 20 blocks, sashing strips and one border.

A second border will require 1/2 yard and the final border requires 1 yard. Binding will require 3/4 yard and backing 5 yards of standard width fabric. 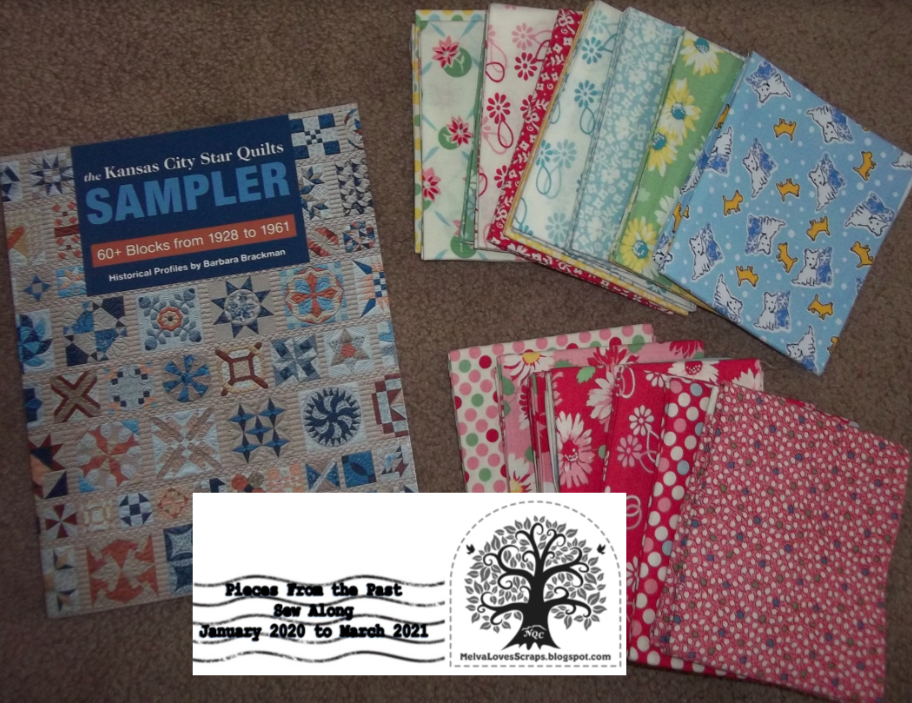 When your block is complete share on instagram, tag me (@MelvaLovesScraps) and use hashtag #PiecesFromThePastSewAlong or post on my fb page - Melva Loves Scraps. Each completed block photo shared before the next published block will be entered in a random drawing for a chance to win a fat quarter.

Those that complete all 20 blocks are not only eligible for the tri-weekly drawings but will also be entered into a random drawing for one of five C&T Publications Kansas City Star Quilts Sampler pattern book.

I think that covers all of the necessary details... but tell me...

Have you researched your family?

What is your heritage?

Interested in documenting stories of your parents or grandparents? I have a .pdf file that you can access in my payhip "store".... Priceless Conversations. This will be the same place that you will find the patterns in the coming months.