Avoid feeling overwhelmed anytime you encounter unfamiliar sewing terminology with a handy guide to even the most complicated of sewing speak with How to Speak Fluent Sewing. We are honored to interview the sewing genius herself, Christine Haynes. She's sharing tips for beginner sewists, where she finds her inspiration, and more!

C&T: How did you become interested in sewing? Have you been sewing for a long time?

Christine: I grew up in an artsy community where I was able to take oil painting and ballet classes at a young age, so sewing was part of a big pile of creative things I was exposed too at that time. I officially learned when I was around 10 years old, but I didn’t really start sewing seriously until I was 18 when I started working at a local fabric store. I bought my first serger that year and I was changed forever.

C&T: What is your favorite kind of project to sew?

C: I am 100% a dresses girl, so those are by far my favorite projects to sew. Lately I’ve been getting into loungewear since I have been working from home now for almost a year and I found I needed more work-at-home outfits and didn’t need quite as many fancy dresses. 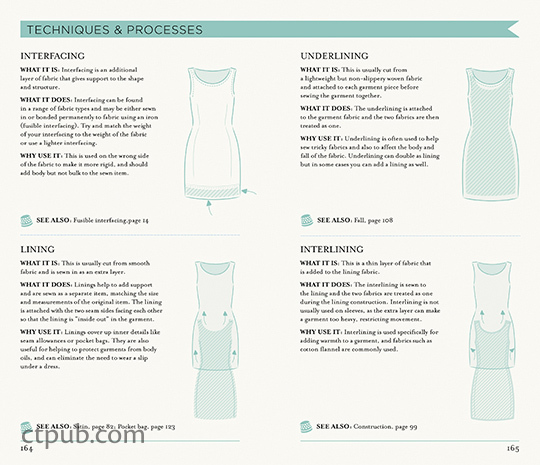 {Techniques featured in How to Speak Fluent Sewing}

C&T: Where do you get your inspiration?

C: I have a tremendous collection of vintage books, sewing patterns, records, and all kinds of things I’ve gathered over the years that provide a lot of inspiration. I also watch a lot of old films, and love watching people on the street too. Inspiration can come from the smallest of things when you’re least expecting it, which is why it’s always good to have a camera and a sketchbook on hand!

C&T: Do you have any tips for beginner sewists?

C: Start small and take your time. I have been teaching sewing for 8 years and the best students are those that carefully went from project to project in an appropriate order, always challenging themselves, but never jumping too far ahead. For example, if you’ve never inserted a zipper before, try it first on a non-garment made from a stable woven fabric before trying it on a satin gown. You will only get frustrated and will perhaps be turned off of sewing altogether. Take small steps and enjoy the process of learning!

C&T: Tell us something that most people don’t know about you.

C: Wow, that’s a hard question! Well, many in the sewing scene don’t know that I had a career before doing this full-time. I have a BFA from the School of the Art Institute of Chicago and after graduating I worked in museums and galleries for nearly a decade, all the while building up my sewing business, until eventually I was able to leave that behind!