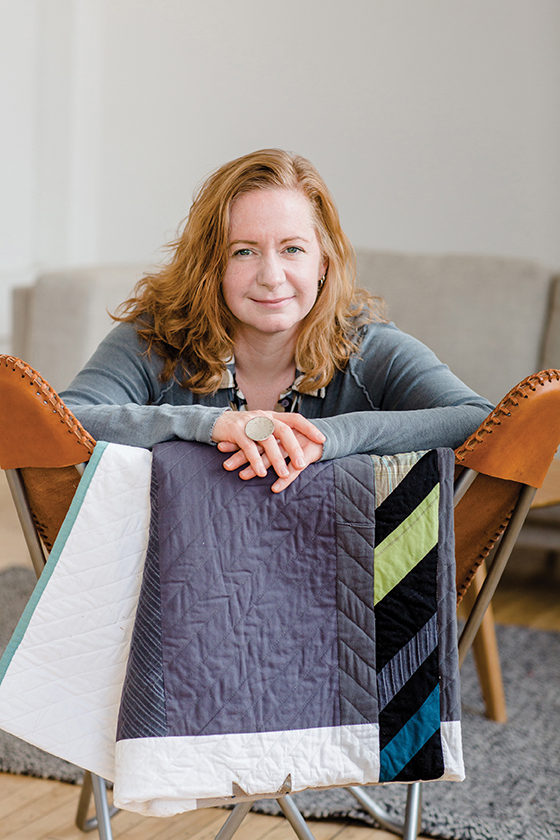 Suzanne Paquette is a modern quilter, designer, and creative director. Through her company, Atelier Six, Suzanne designs quilt patterns and creates Modern Heirloom memory quilts, combining her love of modern aesthetics and the emotional engagement of objects with meaning. Her work has appeared in books (Modern Quilts: Designs of the New Century, Handmade Getaway, and The T-Shirt Quilt Book) and quilt exhibitions (QuiltCon 2017, Montreal Modern Quilt Guild’s exhibition: Moderniser la Courtepointe, 2016). When she’s not creating for Atelier Six, Suzanne works with the team at Camelot Fabrics as their Marketing Director.

Suzanne’s design education and experience has taken twists and turns, all eventually leading to modern memory quilting. After graduating with a BAA in Fashion Design from Ryerson University and working in costume for Broadway shows, she launched her millinery line and retail store, Six Degrees, on Queen W. in Toronto – her first foray into the entrepreneurial world. In 2001 Suzanne ran away with the circus to work with Cirque du Soleil for 13 years as creative lead in consumer product development, for over 25 international shows. It was at Cirque that the spark of bringing emotional depth to creative work was ignited, and where she learned that “Impossible is only a word”.

Suzanne’s work has appeared in the New York Times, Toronto Star, the Montreal Gazette, Elle Quebec, We Seek (E-180), and other publications. She lives in Montreal with her family, including Daisy the dog and Squirrel the cat. Learn more about her work at ateliersixdesign.