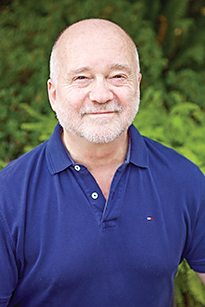 Bernie Tobisch was born in Germany and moved to Canada as a young boy. He grew up in Saskatchewan and moved to Alberta in his early twenties, where he began his career as a sewing machine technician with Singer. He became a dealer after a few years and continued to service machines. In the late 1980s, he moved to the Vancouver region, opened up shop, and has been there since. He has a daughter, Bonnie and son, Gord. He also has one grandson, Dylan, whom he thinks would make a great technician!

Bernie is happily married to his wife Shelley. They met in the sewing machine business and have worked together for the last twenty years teaching classes on Precision Piecing, machine quilting, and getting to know your sewing machine. He also still services sewing machines.

Bernie enjoys sailing and fishing and if he ever retires, would love to sail off into the sunset!