Author and quilt collector Bill Volckening is doing a series of blog posts called “Where have I seen that quilt before?” highlighting the most recognizable quilts in his collection. Some of these quilts are featured in the new book, Inspired Free-Motion Quilting: 90 Antique Designs Reinterpreted for Today’s Quilter, co-authored by Volckening and award-winning longarm quilter Mandy Leins.

The French expression "deja vu" translates to "already seen" and is meant to express the uncanny feeling of recollection. Sometimes people look at the quilts in my collection and think, "Deja vu!" Chances are, they have already seen the quilts...but where? 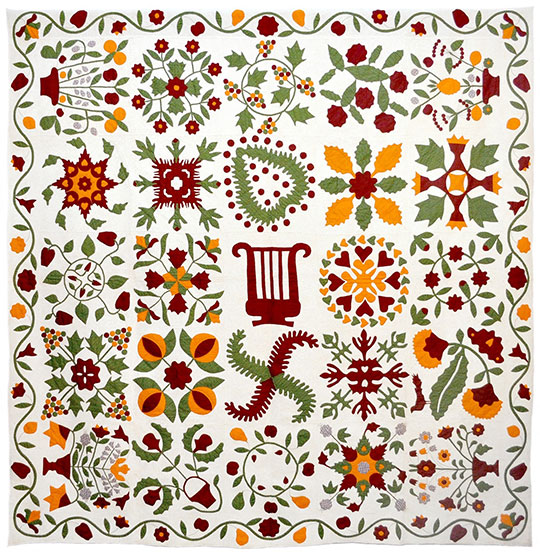 The first time I saw the quilt was at Shelly Zegart’s home in Louisville, Kentucky, in November 2001. She pulled a box from under a spare bed and when she opened it, my heart skipped a beat. The most exquisite quilt I’d ever seen was inside. 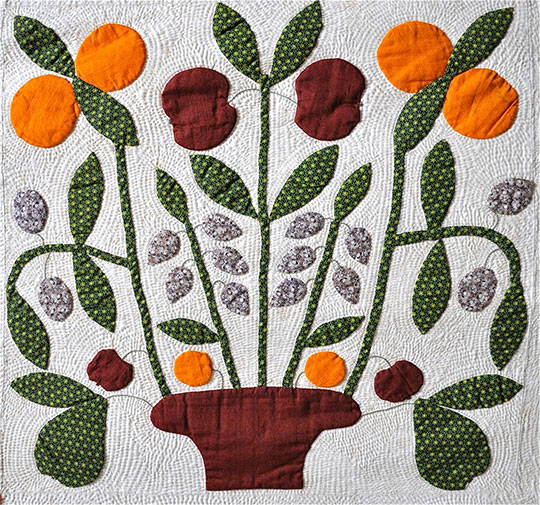 It was clearly old, but remarkably pristine, with dense hand quilting and crisp, color-saturated fabrics that looked fresh off the bolt. It came from the collection of the late Sandra Mitchell, who ran the Midwest Quilt Exchange in Ohio and was known as a dealer’s dealer.

Mitchell called the quilt a ‘Pennsylvania Album,’ maker unknown, c. 1865, and it represented her collection in Zegart’s book American Quilt Collections: Antique Quilt Masterpieces (1996, Nihon Vogue, Tokyo). She may have acquired it some time between 1986 and 1996. An article about her in The Quilt Digest 4 (1986, Quilt Digest Press, San Francisco) did not include the quilt. 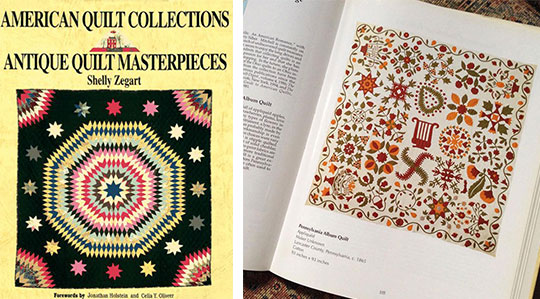 In 2001, Mitchell died suddenly at age fifty-eight. Her possessions were liquidated. The quilts went to dealers and collectors. Shelly Zegart acquired several of the very best ones, including the 'Pennsylvania Album' with the lyre center block. Soon after, the quilt appeared in Zegart’s head-shot portrait on her website and in other publications. 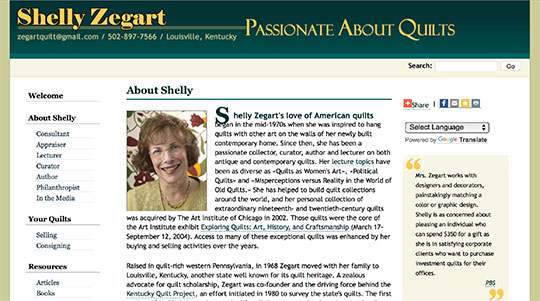 Five years later, I bought the quilt. At the time, I believed there could be no other one like it. Hand appliquéd and densely hand quilted, with an estimated number of quilting stitches around one million, it had all the hallmarks of a one-of-a-kind original.

In 2010, I learned about an almost-identical quilt made across the state line in West Virginia. Harriet Small of Martinsburg, Berkeley County, West Virginia, made the quilt around 1850—when West Virginia was part of the Virginia Territory. It was unearthed by the West Virginia Heritage Quilt Search and listed by the Quilt Index, an online database with more than 50,000 records from statewide documentation projects and collections across the United States.

The doppelganger also appeared in the book, West Virginia Quilts and Quiltmakers, Echoes from the Hills by Fawn Valentine with the West Virginia Heritage Quilt Search, Inc.. The image on the book cover was the same design as one of the blocks in my quilt. The full view image was even more eye opening. A majority of the blocks were in both quilts.

All signs seemed to point to Harriet’s family, particularly her mother, Mary Couchman Small and possibly Harriet’s sister, Elizabeth; but my communication with the people in West Virginia abruptly ended after I started asking questions about the condition of Harriet Small’s quilt.

In the original documentation record, the colors were rich and saturated. They matched my quilt. Harriet’s quilt did not look the same in the book. The deep burgundy color appeared to be a much lighter cherry red. The white background looked pink and the green looked faded. Was it just a bad photo, or had someone washed the quilt and ruined the colors? 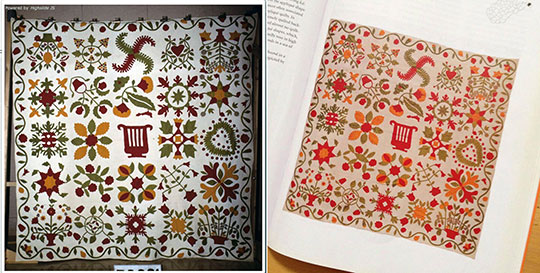 In 2010, I was supposed to do a poster presentation at the American Quilt Study Group Seminar, but couldn’t make it—so I did a blog post with a virtual presentation of my research.

In 2012, a third almost identical quilt surfaced when I received a note from a Facebook friend, whose family had the quilt. Research is still underway to determine who may have made that quilt, and I blogged about it when I first discovered it. 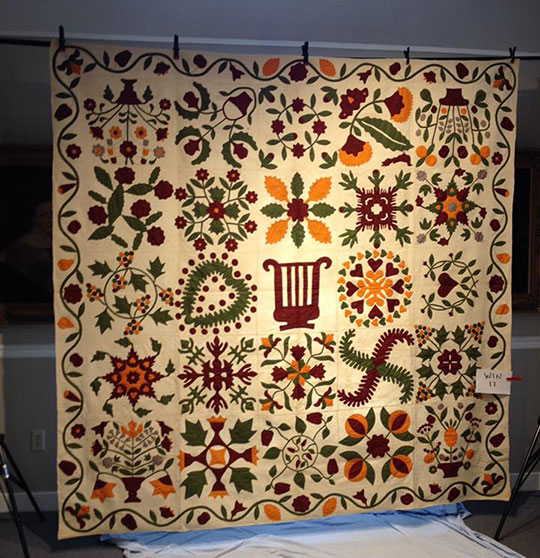 The high-quality workmanship in all three quilts suggests a dowry, wedding, or some other very special purpose. So, where have we seen that quilt before? It was on Shelly Zegart’s website, in her book, and in an article about Cheddar by Pepper Cory in Quilters’ Newsletter. It was also displayed at the 2015 Airing of the Quilts at the Milwaukie Center in Oregon. 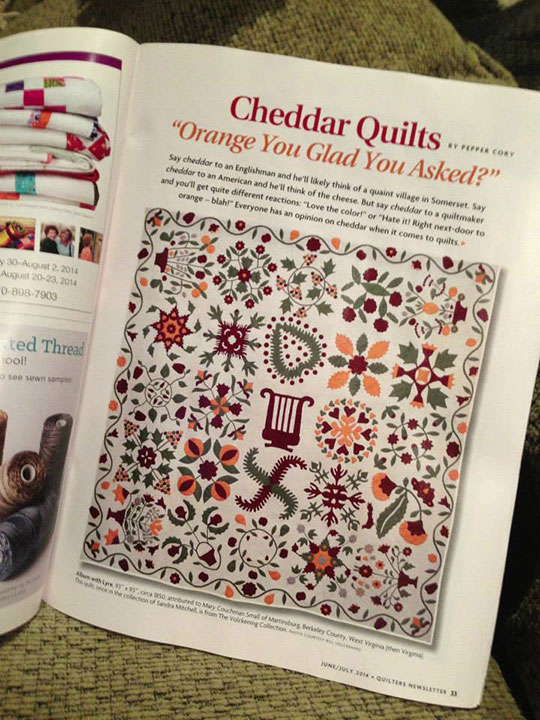 Recently I brought it for show-and-tell at Portland Modern Quilt Guild’s November meeting, and it is in the new book, Inspired Free-Motion Quilting: 90 Antique Designs Reinterpreted for Today’s Quilter, co-authored with Mandy Leins. 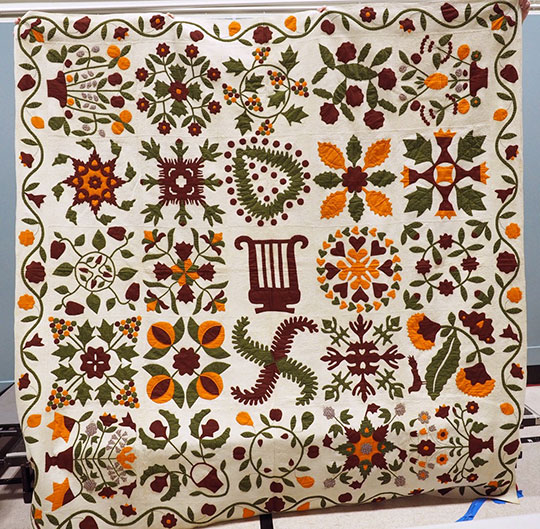 The best part about having a quilt collection is sharing the quilts, even if it seems like oversharing. People worry about oversharing in 2018. It's a thing. I never worry about it with old quilts. I want everyone to see them, even if some folks saw them before. The quilts may be old, but it never gets old looking at them.