Skip to main content
Free domestic shipping on orders over $75

If you know Carrie Bloomston, you know how enthusiastic, creative, and hardworking she is. We loved working with her on her upcoming Stash book, The Little Spark—30 Ways to Ignite Your Creativity, which inspires you to practice creativity in everyday life.

Then Carrie told us about a special upcoming event and her involvement in it:

His Holiness the Dalai Lama will visit Birmingham, Alabama for a few days beginning on Oct. 24, 2014. This epic visit to such an important city for the civil rights movement is spurred by His Holiness' interest in the work of Martin Luther King, Jr. and his Letter from a Birmingham Jail. Both men have changed the face of human rights all over the world. We intend to honor and celebrate His Holiness the Dalai Lama by blanketing Birmingham in prayers—actually in thousands of prayer flags from all over the world...

When Carrie told us she was planning on leading The Happy Flag Project—a campaign to gather handmade prayer flags for the Dalai Lama’s appearance in Alabama this fall—some of us here at C&T decided to take a page from Carrie’s book and get creative!

The top photo shows the C&T string of prayer flags! Carrie asked only that we kept our flags a certain size, giving us freedom over our design and aesthetic choices. We used so many different colors and techniques.

Each flag tells a story—a story of what we have seen lacking in the world, and wish to help inspire. Many of us chose to include images of peace: Ruthmary’s dove, for example, or Megan and Austin’s peace drawing. My glitter-glue peace flag, shown next to Ruthmary’s dove flag in the top photo, gives the word for “peace” in 9 different languages.

We also used themes of love, like in Debbie’s heart flag. Katy used lyrics from a Mumford & Sons song that celebrates the liberating power of love.

While our messages were similar, our techniques and results were incredibly diverse. Check out the middle flag in the lower left photo, where Liz used an improvisational piecing method.

To the left is Dawn’s tree and ladybug appliquéd flag. Dawn loves wool and felt appliqué, so she decided to incorporate this into her design.

To the right of Liz’s flag is a bright mixed-media raven flag using a variety of surfaces and textures. Mary used Lesley Riley’s TAP Transfer Artist Paper to create this overlapping effect.

Debbie’s rainbow flag, in the lower right photo, has lyrics to John Lennon’s “Imagine” penned over a beautiful rainbow—one that continues off the flag in ribbons! Doesn’t her flag look just gorgeous in that light?

On the left of Debbie’s rainbow flag, you can see the incredibly rich mix of colors on Kerry’s backlit flag. She was inspired by Buddhist art and used alcohol to blend her Sharpie art. In this lighting, it almost looks like stained glass!

All 10 of us had so much fun making these prayer flags—tangible messages of love, peace, and beauty. They lit up the faces of everyone who saw them in the office. Thank you, Carrie, for inspiring us!

Make sure to take a look at Carrie’s book, The Little Spark—30 Ways to Ignite Your Creativity, available for pre-order today. It will change your life! 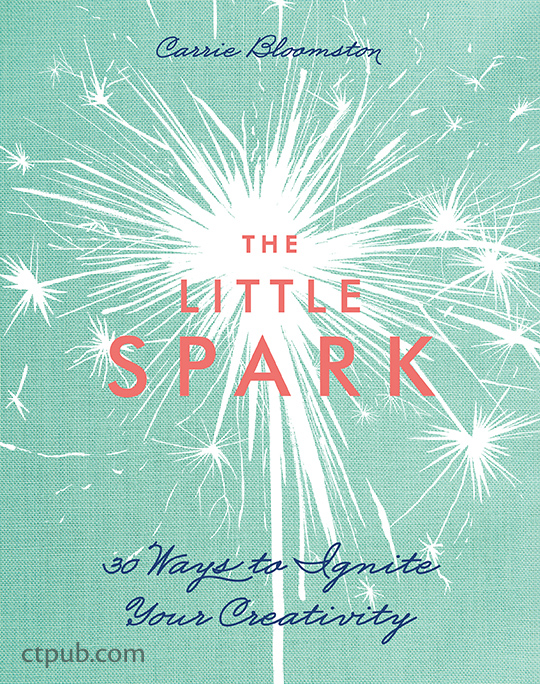 If you are interested in learning more about His Holiness the 14th Dalai Lama and his visit to Birmingham, Alabama, during the Human Rights Week, please visit the following links: