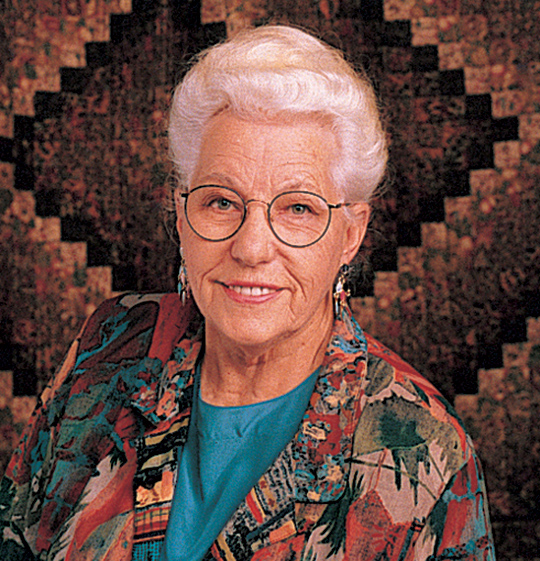 Everyone at C&T Publishing was saddened to learn of the passing of one of our longest-standing authors,  Blanche Young on January 2nd, 2016. We began our working relationship with Blanche and her daughter Helen back in 1987 when C&T took over the distribution, marketing and sales of several Young Publications titles, including:

For C&T this partnership helped build out our catalog of titles and brought a powerhouse team on board who would go on to sell tens of thousands of copies of their publications.

Blanche had a wonderful sense of humor. There were so many occasions whereupon I would get off the phone with her and still be chuckling over something she'd said. To celebrate my marriage, Blanche made a stunning Lone Star Quilt for Jennifer and I which we still cherish to this day. Blanche had a keen eye for color and design. Her quilts sparkled and so did she.

Blanche was an inspiring teacher. She took many traditional quilt patterns and figured out faster and more efficient methods for construction which became the basis for the many quilt books she co-wrote with her daughters.

In the Fall of 1988 C&T released The New Lone Star Handbook by Blanche Young and Helen Young Frost. That title went on to sell almost 30,000 copies. Another best-seller came in 1996 and 10 years later is still in print today. Tradition with a Twist by Blanche and her daughter Dalene Young Stone became an instant best-seller and has sold well over 85,000 copies.

Many people who worked at C&T recall working with Blanche fondly. Ruthmary Shauer, C&T Customer Service & Sales Rep credits Blanche with being a true inspiration for developing her passion for quilting. Publisher Amy Marson shares a humorous interaction she had with Blanche at Quilt Market:

When we were at spring market in Portland several years ago, we were waiting outside for a taxi and they kept passing us by–I think you were trying to hail one. Blanche said she could get a taxi right away, she stepped out by herself, laughingly made a joke about how they will always stop for a little old lady, and the first taxi that came by stopped for her. Then we all walked out and got into the cab. She was so pleased with herself that she could *pretend* to be a little old lady when it suited her because in reality she was always young at heart.

Blanche always kept you guessing! She will be dearly missed by all who knew her. Everyone at C&T would like to extend our deepest condolences to the Boberg and Young families.